I take Sundays off in case you're wondering. Yesterday was also a very long drive and I wasn't feeling like doing anything after it. Now I'm better though. Phoenix oolong tea does that.

I started work this morning in a wonderfully quiet abode at around 5:30am. Every time I visit Mammoth, I seem to get altitude sickness the first few days, even though I grew up here. Today I had a stomach and head ache all day but somehow pressed through the workday pretty well. I even got a chance to work from a coffee shop after a team call this morning.

If you are in Mammoth, the best coffee shop — by far, and better than those in most metropolises — is Black Velvet Coffee. They roast in house, two stories above the main floor. Their coffee is all organic because the owner's wife is a health aficionado. They even have raw milk, one of those fancy things I've never cared for or been able to distinguish from its regular sibling. I spent all afternoon here and worked an extra long day because there's a lot of driving to do later this week and it'll be nice to have a bit of extra time for that.

In between work, a friend and I looked at a strange issue on my Golf. I flipped down the seats to take almost everything I own up here for storage and the middle seatbelt is now locked while it's flipped down, so I can't flip it up without creasing the seat. To fix it, we'll have to unbolt it from the frame. That should be a fun job for tomorrow. But he's a busy guy. He's trying to sell his Nissan so he can go on a road trip too, and to Canada as well, but with his wife because spouses are better for road trips than friends. 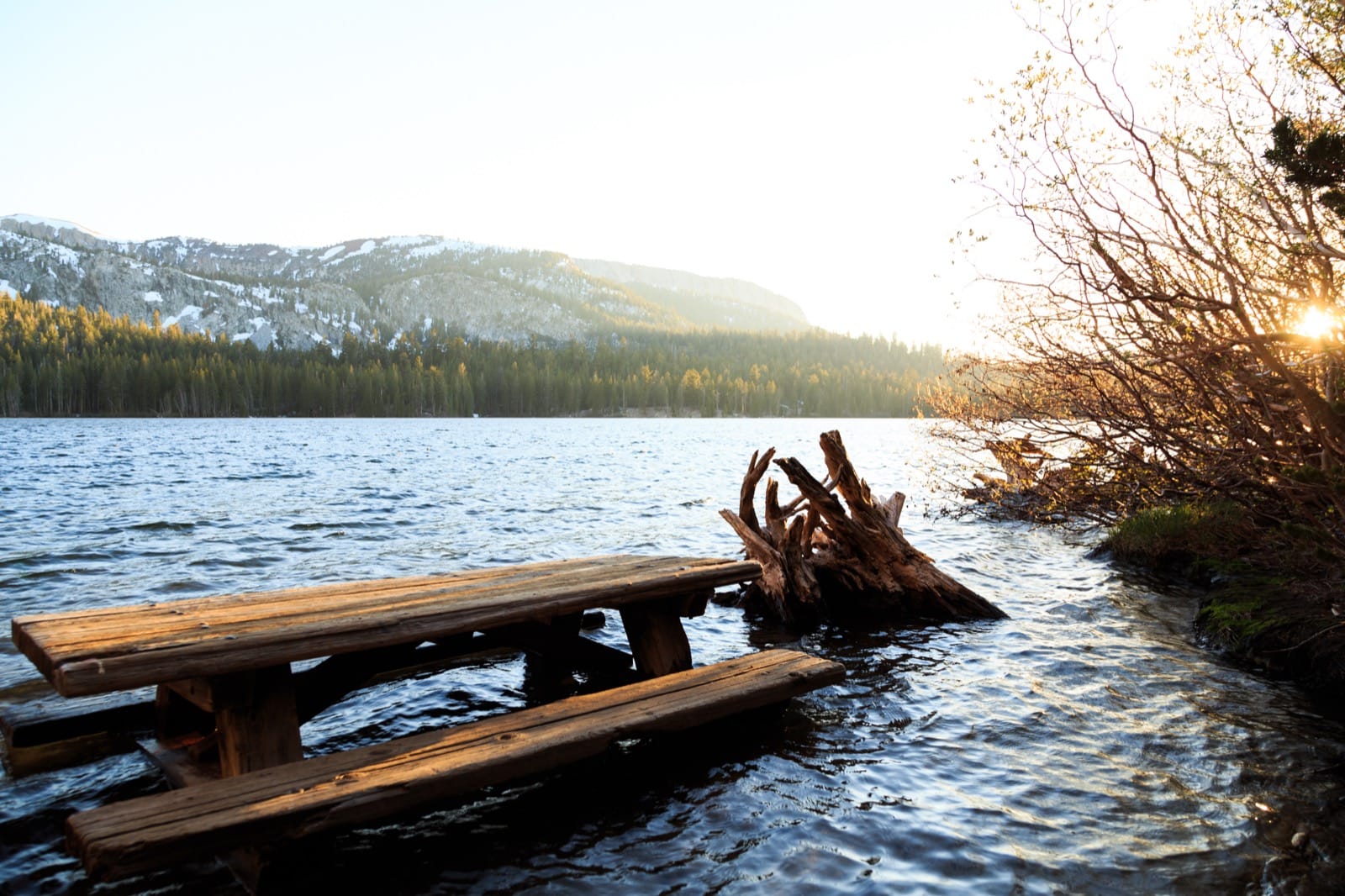 To wrap up the day, I drove up to some of the lakes to take photos of the sunset. The event itself was underwhelming, but I did get some nice golden light in the trees and on a partially submerged picnic table, of all things. It made me rethink whether small lakes have tides.

As far as conversations go, most of them were at work today. I had a purposefully awkward interaction with someone I met a long time ago with the same first name as me. I said something like "Do I know you?" as I walked quickly to the restroom. I definitely knew him, but he was doubting it for the next few minutes. Once I was off work, I hung out with my old youth group leader (such a thing of the 2000s) and discussed the fascinating philosophies and theologies of LGBTQ folks in our lives. It's always an interesting discussion, and I still don't think I've heard anything better than what The Liturgists said about it. I find love that the world is so subjective, because that's what makes it diverse. If it was objective and empirical, we wouldn't need opinions and we'd be bored. But we wouldn't know boredom because we wouldn't have opinions to know it.

Anyway, not going there. That's about all for today. I didn't sleep much last night due to dehydration and the absolute silence of this place. Hopefully tonight it a bit different. We have an all-hands call at work tomorrow so I need extra social energy to make people laugh.