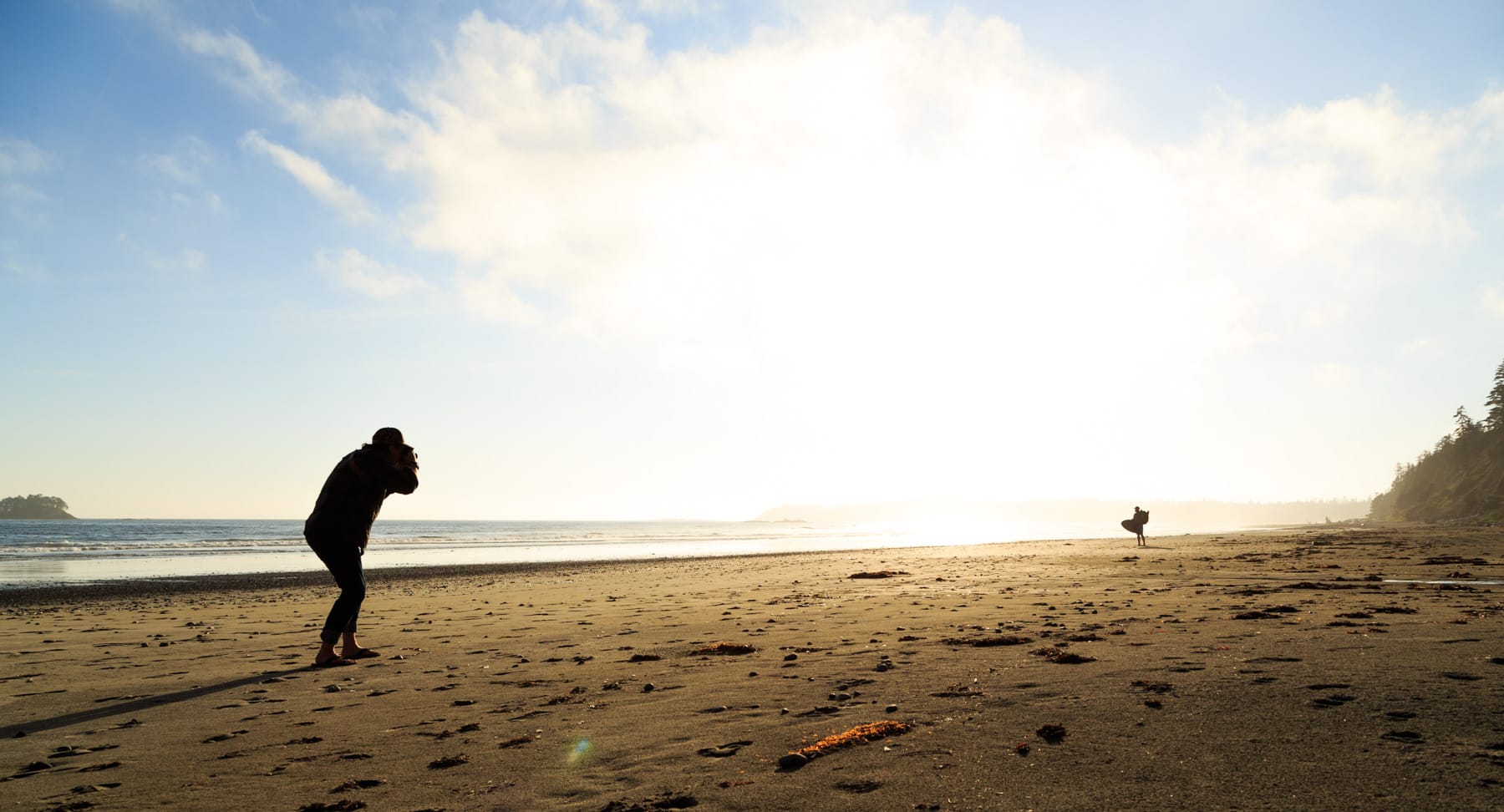 Well scrap that. I just deleted everything I wrote this morning because, well, I wrote it this morning and that's not how a daily reach goes. I'm supposed to write it all at night while overly-modified cars attempt to race down Bastion St., right? Exactly right!

Surprise to no one, I'm back in Nanaimo. I took a few days off this week to visit the west coast of Vancouver Island, Tofino and Ucluelet in particular. It was a dreamy spectacle, and there was lots of rain. I miss the tranquility, but I don't miss car-camping or the lack of internet coverage. I actually planned to work the whole time over there — I had some fantastic cafés lined up for the three days we were there and everything — but it just didn't work out. I really should have driven my own car up here. 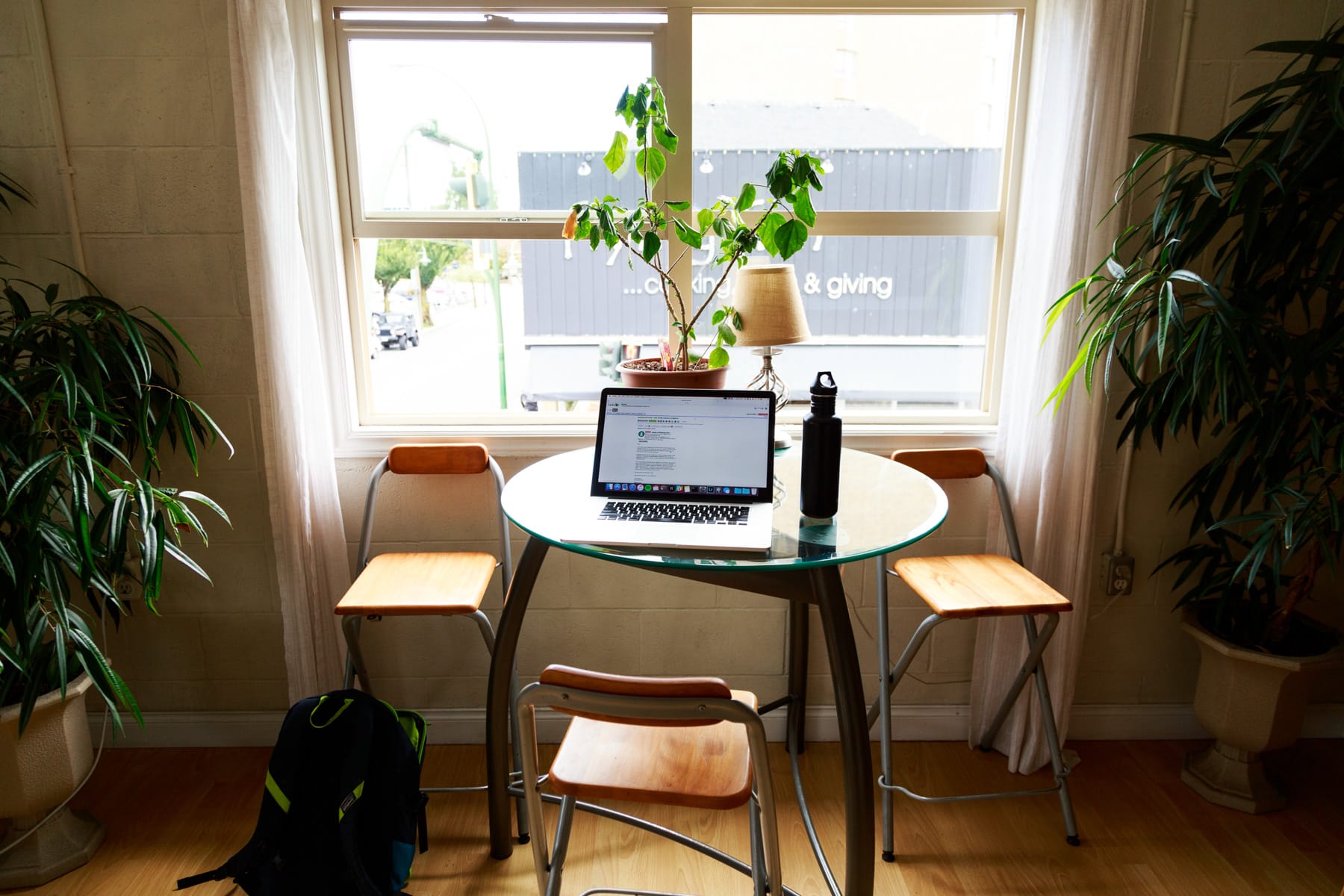 So yeah. I'm back in Nanaimo, this time downtown at Painted Turtle Guesthouse. This place is fantastic, aside from the obscure insect I found in my room the first night (of which there have been no others, and there is no evidence of bed buggery, so I'm happy). The kitchen is vast and the view from all the rooms is nice. The noise from my room is not so nice, since it's on a busy street, but closing the window helps dampen a lot of it.

That's an update on that. Now, on to the usual programming.

Today I worked from three places. The first was Perkins Coffee, which had mediocre hot chocolate and palpable wifi. The thing it didn't have, and the thing I visit coffee shops and cafés for in the first place, is people hanging out. It doesn't promote that kind of thing with its drab environment, so I left after an hour and a half and made my way to Mon Petit Choux once again. Then the magic started.

I really like Mon Petit Choux. Lots of normal people come in throughout the day, and one or two obscure ones. I was hoping to chat with a woman who was perched in the corner of a wall of booths, but she seemed very interested in her work which probably had something to do with her colored pants. I mainly wanted to chat with her because she seemed to be working from the café as well. But I actually didn't talk to anyone there, aside from the owner for a brief moment. Instead, I observed something out of a film or novel.

It was a breakup, but a very temporary one. A couple sat across the room from me eating breakfast and having a normal day. Then suddenly, the guy's voice raised a few decibels and he started talking about how every time he wanted to spend time with her, she didn't make him a priority. I was trying to work, so I caught a bit more of it and forgot whatever that was, then he got up and stereotypically stormed out. I expected him to return a few moments later, but she sat, seemingly content, for another hour and a half by herself.

I'll admit, I was tempted to walk up and ask what happened. Then take a photo. Of course I didn't. I watched her over the time he was away and it looked like she was crying at a point, but I'm really not sure. When he did return, it was even more stereotypical. She started smiling as he approached, and walked up and kneeled at the same time (a walking kneel, as it were), saying how sorry he was and how wrong he had been. It was an hour and a half ago. Then they just kept talking as if life were normal. People are strange.

Next up was Bocca, a strange little café no one mentioned to me before. They don't even have their own wifi — they split it with the establishment next to them, Woofles. (It's actually called Woofles Barking Boutique. I know, I know.) I was skeptical, but I walked up there anyway since it's only 400 meters from me. I ordered a fancy chocolate-cake-bar-thing that had chili peppers in it. It was really strange, but delicious. Then I sat down and began working, hoping I would be able to talk to someone random.

I went two hours without talking to anyone. I overheard a French woman and a girl who knew French jumping between the languages and talking about various things in their lives. The girl had a similar complaint to the guy in the relationship at Mon Petit Choux: Some guy in her life couldn't schedule her into things. I thought, "Hey, I could schedule myself into her life. If she wants someone to schedule things, I'm that guy." But then I kept working.

A few minutes later, one of the girls who works at Bocca was sweeping up. I offered to move and she said it was okay for me to stay put. She was just "cleaning up so the birds don't come in". I asked her more about that and she said that cute birds could enter the shop and try to eat crumbs off the floor, not fearing humans, and then get stepped on. I started laughing, because really? "Does that really happen?" I asked her. She said not since she had started there a while back, but apparently it can happen.

Now that was just awesome. When does someone talk about birds being stepped on? Do you even think about such things in your day, or month? If I were a bird, I would just take flight as soon as the sole and heel of a shoe approached my feathers. Maybe Nanaimo birds aren't like Jacob birds. Whatever the case, that one will stay with me for a while.

If you'll excuse me, there's a band playing at the lounge under this hostel. It sounds ... like music. I'm going to listen to that now.