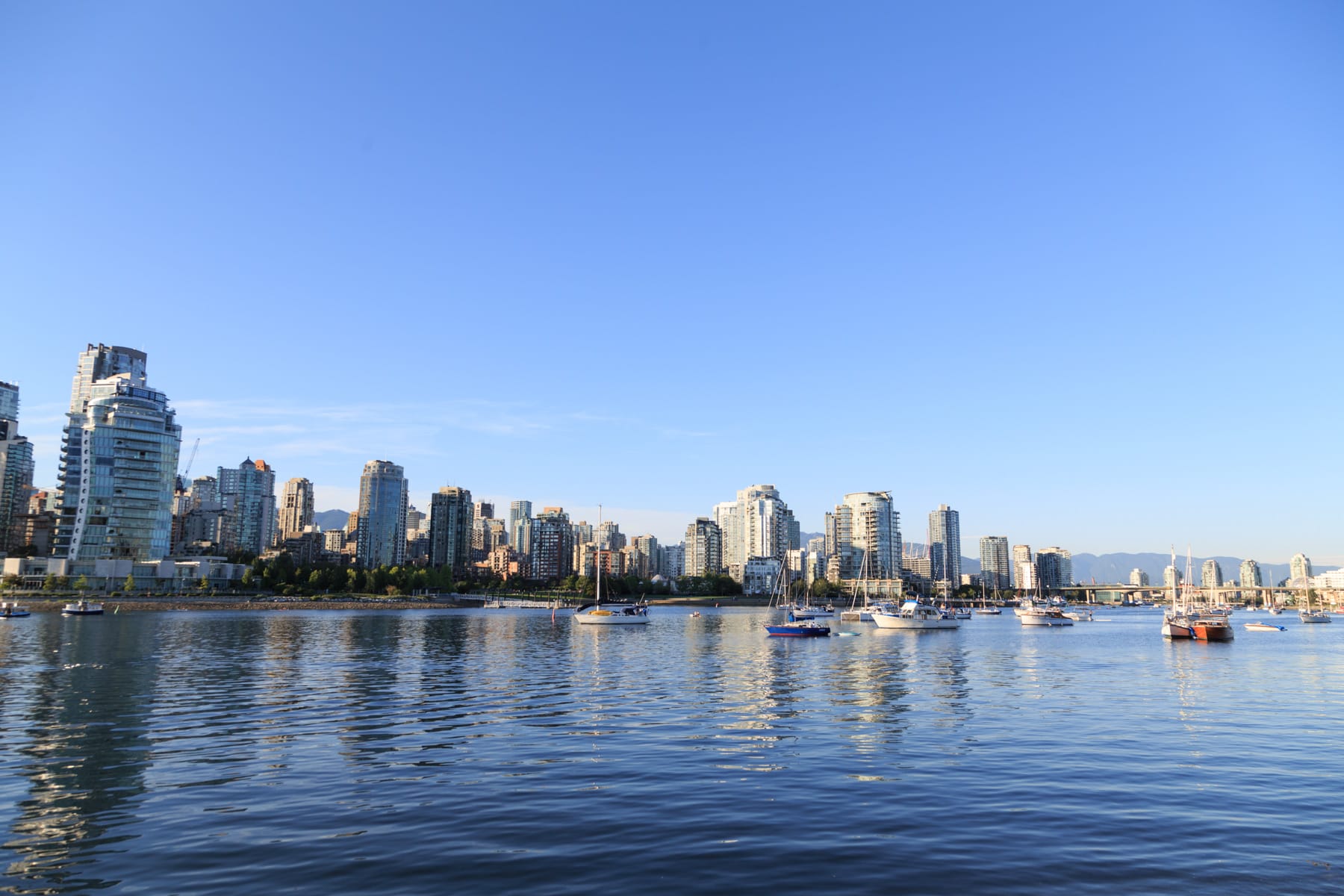 Yep, I love Vancouver. I didn't think I would anymore because everyone complains about it. There are a lot of homeless here, and it's a bit different than anywhere else I've seen in the world. However, it's still a really spectacular place, especially in summer. Last time I was here it was January, and we did get one day of sunshine, but other than that it was cold and gloomy, which is what Vancouver is normally like apparently. "We work for this", my friend said, referring to the beautiful sunny day of 22º.

I wanted to say so much more about this city last night, but it was very late and I was very tired. It's still late tonight, and I have a flight at 5:40am, but I want to make sure I do the best I can with today's post so I edited some photos and got things together. Somehow.

I worked from three places today. Actually, four, but I don't like to count Starbucks as it's just a charging point. First I headed to Matchstick Coffee, a large and warm shop downtown. They served breakfast so I thought it would be a good start to the day. I wish I was more in the mood for their breakfast though. I did eat it, but toast with salmon and an over easy egg is apparently not what I needed this morning. It did get me through the day, and it was delicious, all the same. They also had great music for the morning, starting off with José González's Veneer album which I hadn't given a chance. I love it when cafes give you a chance to hear music in a different way and get something else out of it. 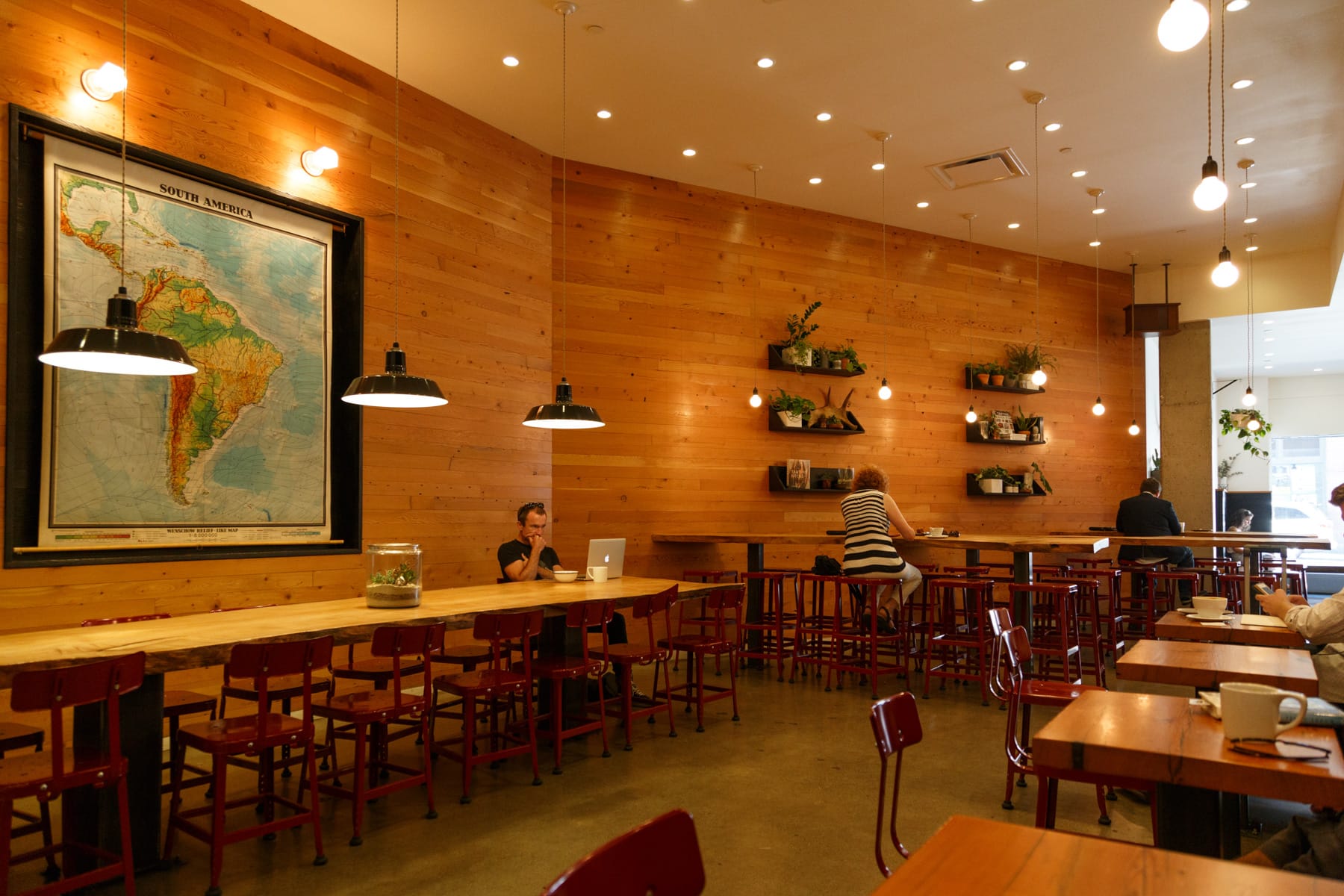 I had hoped to meet someone interesting in Matchstick but it didn't get busy until I had to leave due to my battery being at 2%. I walked up to Starbucks a block over and spent a few hours there. They had some smooth jazz playing all morning as Starbucks does, and I chatted with the staff a bit about my journey to the island and back to California. She just wrapped up a road trip across the US with her partner in a minivan, which just made me want to do the same thing. I will purchase a partner. It will be a dog.

This morning included a commute, because I'm staying in Kitsilano, which is across a bridge from downtown. I jumped on a bus and after two stops a woman with a walker and too much makeup got on the already-full bus and shouted to make her presence known. She refused to believe that the bus was full even when the driver told her it was. The girl standing next to me told me that the lady does this every day.

After Starbucks, I had two other items on my list from a friend: The Birds & The Beets and Medina. I set off to Medina for lunch. The place gets really busy around 1pm apparently. I just sat at the bar and after falling into my seat (because backpacks make you trip over everything) noticed a beautiful drink in front of the man to my left. I asked him what it was, and he said "some sort of lemonade", so I just asked the bartender for what that fine gentleman was having. It was a hibiscus lemonade with something else in it that I can't remember. It looks nice, has lots of sugar, and should have given me energy before lunch. 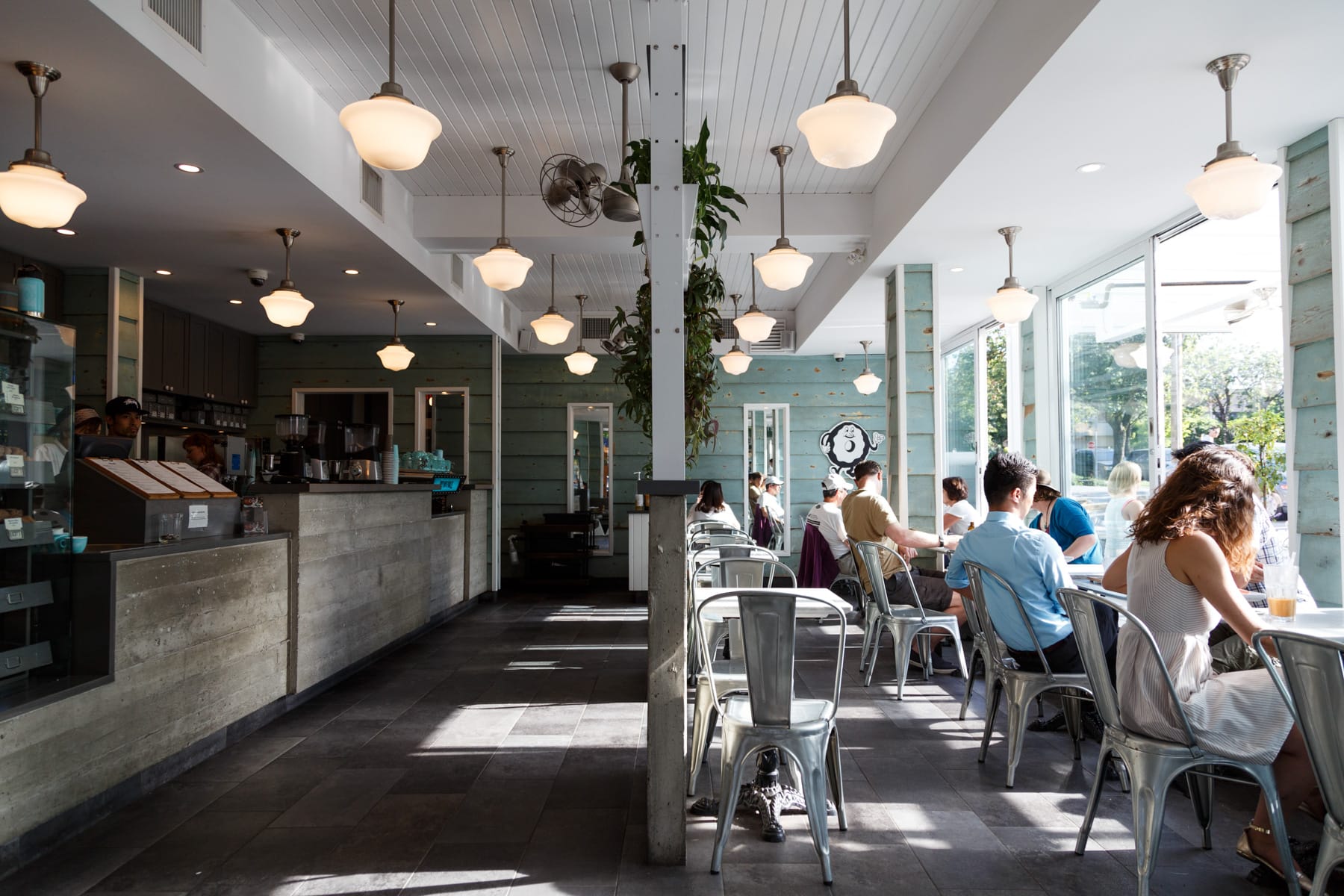 I don't remember how, but I started talking to the guy next to me. His name is Niko, and he's a pilot for Cathay Pacific, an airline I hadn't heard of before. He lives in Hong Kong, but he's from San Diego. We chatted about a lot of stuff, but the most memorable was when we got to the usual consistency of conversation between men: women. He told me I had to go to Columbia, because there are so many wonderful Victoria Secret-caliber girls there working on farms. I don't have a tendency to visit countries just to hang out with girls, so I put it in the back of my head.

He also told me a story of his friend who found a Russian wife online. Everyone laughed at him at first because, really, that doesn't happen. And not to this guy, Niko said. This guy wasn't someone who would get a ten in our society. When they finally met the girl, they were amazed. She spoke English very well, was actually really cool, and was of course the spectacle they had heard of.

That really got me thinking about society. Yep, only me, thinking about society during a conversation about beautiful Russian women. There are a few sides to this, though. The fact that a guy who has a really cool personality doesn't end up with women who he finds super attractive is fascinating to me. I would need a diagram to explain everything going through my head when considering this.

My perspective (who knows if it's the right one) is that women in western countries (not that Russia is undeveloped) keep up with popular culture so much that they think it's what they need. They gravitate toward that. So do a lot of men. There are plenty of men who don't, though. For them, it seems like these women are out of their league. I know where their coming from — it's a daunting thing. If they had confidence that they could be friends or married to someone that attractive, would that change things? I'm just thinking of Hitch right now.

There are plenty of other perspectives as well. The most stereotypical one is that the women just want someone who has money and will take care of them, and they will act to get it. Another along that pessimistic tone is that they are just beautiful and that's all there is to them. I don't like think either are true, though. Heck, the guy could be really boring too.

In the end, I got Niko's email and we're going to stay in touch. One day I may go to Hong Kong. 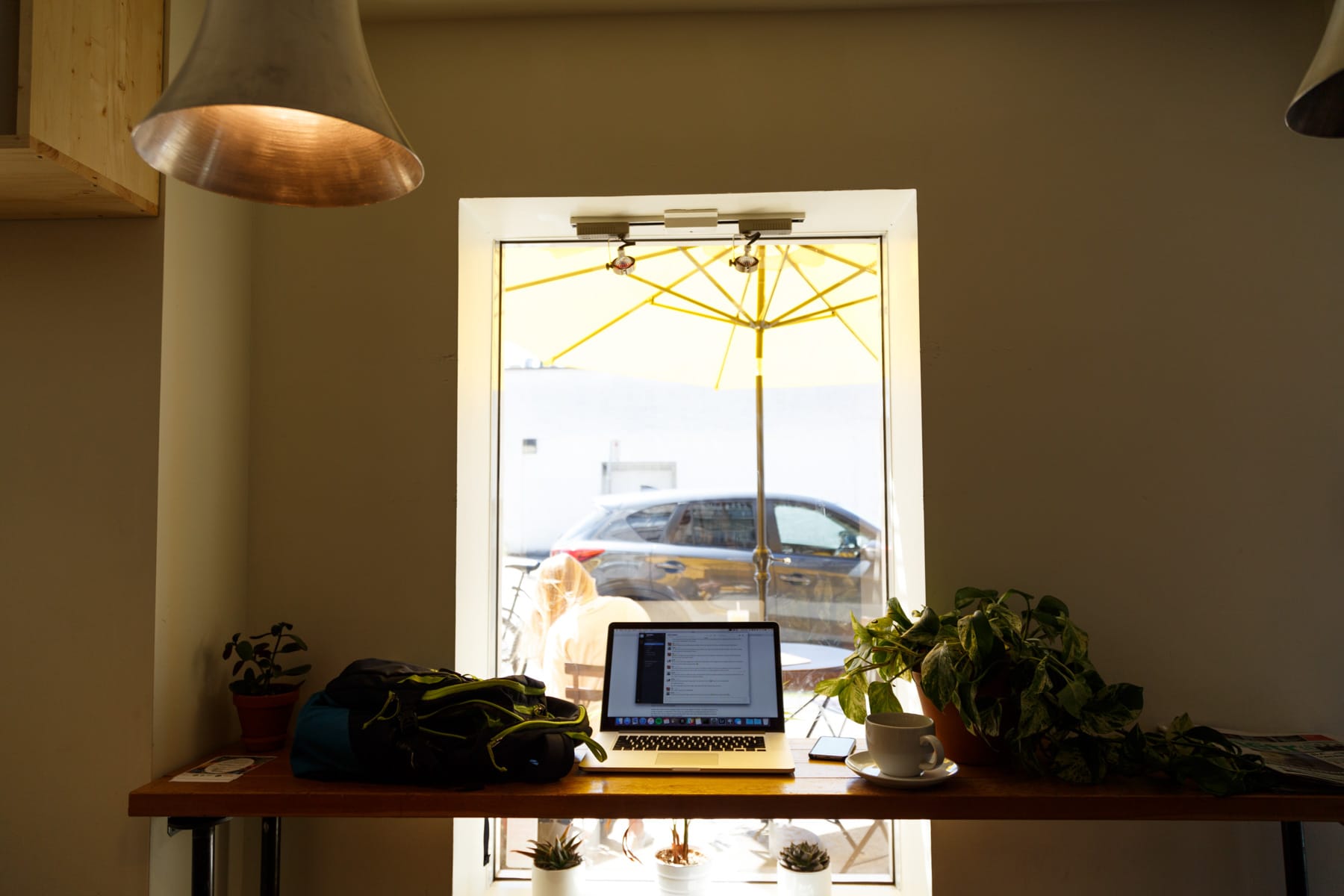 You'd think I'm done, but I had to get back to Kitsilano for the afternoon to work at Culprit Coffee. The exterior was yellow. It looked interesting! I wasn't very impressed, actually. The wifi was okay and the ambiance were adequate, but the people were a bit strange. Maybe I was in the wrong mood. I did overhear, for the fourth time today, two girls talking about Brexit. One was Swiss, the other Canadian. It's the most popular topic lately. I heard it last night at Sunset Grill as well.

Lastly, I needed a doughnut to carry my through the evening so I headed to 49th Parallel in Kitsilano. The old fashioned there was good, and the wifi somehow let me finish my workday at 200kbps. It was a beautiful place, too. Very modern and colorful, sort of like something I've seen in Los Angeles. I chatted with the guy behind the counter about Portland and told him next time he's there, he needs to go to Coava because it's cool.

That's it! Today was powered by the aforementioned José González album and my new favorite song, Bassically by Tei Shi. I also had Lucifer's Eyes by T.O.L.D. on repeat. It's quite catchy.