Since iPhones are typically in our pockets at all times, they're a great tool for learning. Tools like Duolingo and iTunes U have become great alternatives to computer-based linguistics equivalents and paid college courses, respectively. I've been using Duolingo to learn German, and the amount of information it provides for free is simply amazing. Now there's a new app on the block: Elevate. It's an iOS and Android app that aims to "improve focus, speaking skills, processing speed, and more". I've been using it for about a week, and there are a few things I want to say about it.

Games to make you smarter 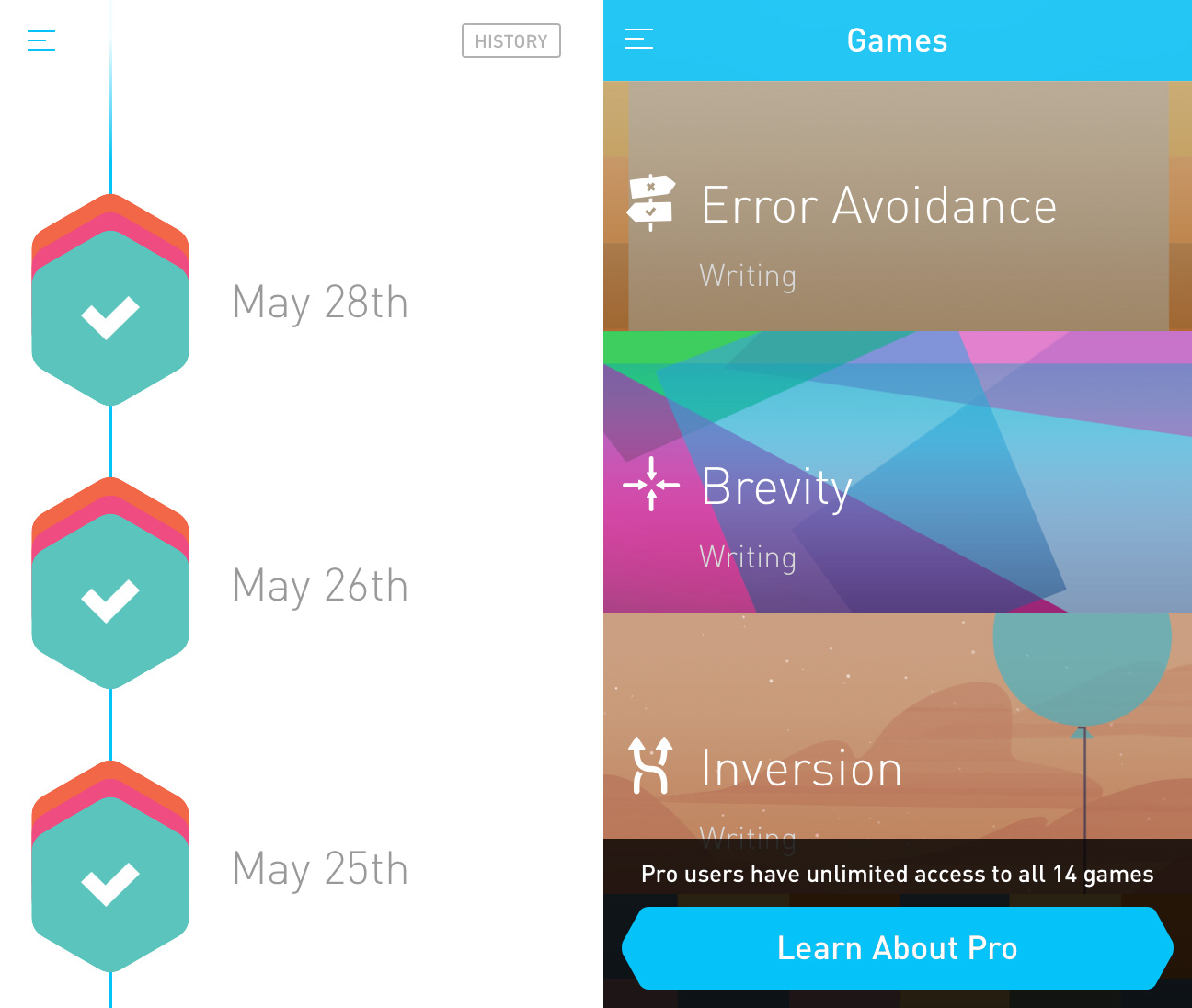 Research has shown that video games can actually be very good for people, despite negative connotations that are often paired with them. Elevate uses games to help your brain think in different ways — to stretch it. The thing is, games combined with learning make for a love-hate relationship, especially in Elevate.

Because games have the potential to be more frustrating than simply reading a book, Elevate's approach to "training" can annoy people. It uses 14 different games to help you improve skills like focus, brevity in writing, and comprehension in reading. If you've taken standardized testing, this might sound familiar. Thankfully, there's no math in Elevate. It focuses on critical thinking and data retention instead, and I think it does a good job for the most part.

The presentation of these games, and the app as a whole, is very pleasant. The designers conformed to Apple's "flat" iOS 7 theme and created something remarkable. That's good, because you'll probably spend a bit of time getting through certain games and it's always nice if they're easy on the eyes.

Unlike Duolingo, Elevate is a shareware: You can use the app for free, but you're only allowed access to 3 of the 14 games per day. The app seems to rotate those so you get a bit of variety, but there are still games I haven't tried after using it for a week — I've never been given a listening game. Elevate Pro gives you unlimited access to all the games, as well as "personalized learning content delivered to you weekly", but it costs $9.99 per month or $59.99 per year ($4.99 per month). That's not a bad price. The thing is, there's no real incentive for me to upgrade after I've used the app for a while. I don't need unlimited access to frustration.

Intuitive activities — most of the time

Now, to the technique behind Elevate. It looks cool on the outside, but can get derivative and vexing pretty fast. I think it's because they aren't going about it in the right way.

I've always enjoyed the way Duolingo teaches you a new language. It doesn't seem too easy, and it learns from your errors. When you begin learning a language, the app puts you right in the middle of things. It gives you pictures to connect to new words and even uses the microphone to help you practice speaking the language (which, I'll admit, is not very effective since you can just mumble and it'll work fine). Elevate aims to be as intuitive as this, but it falls short. 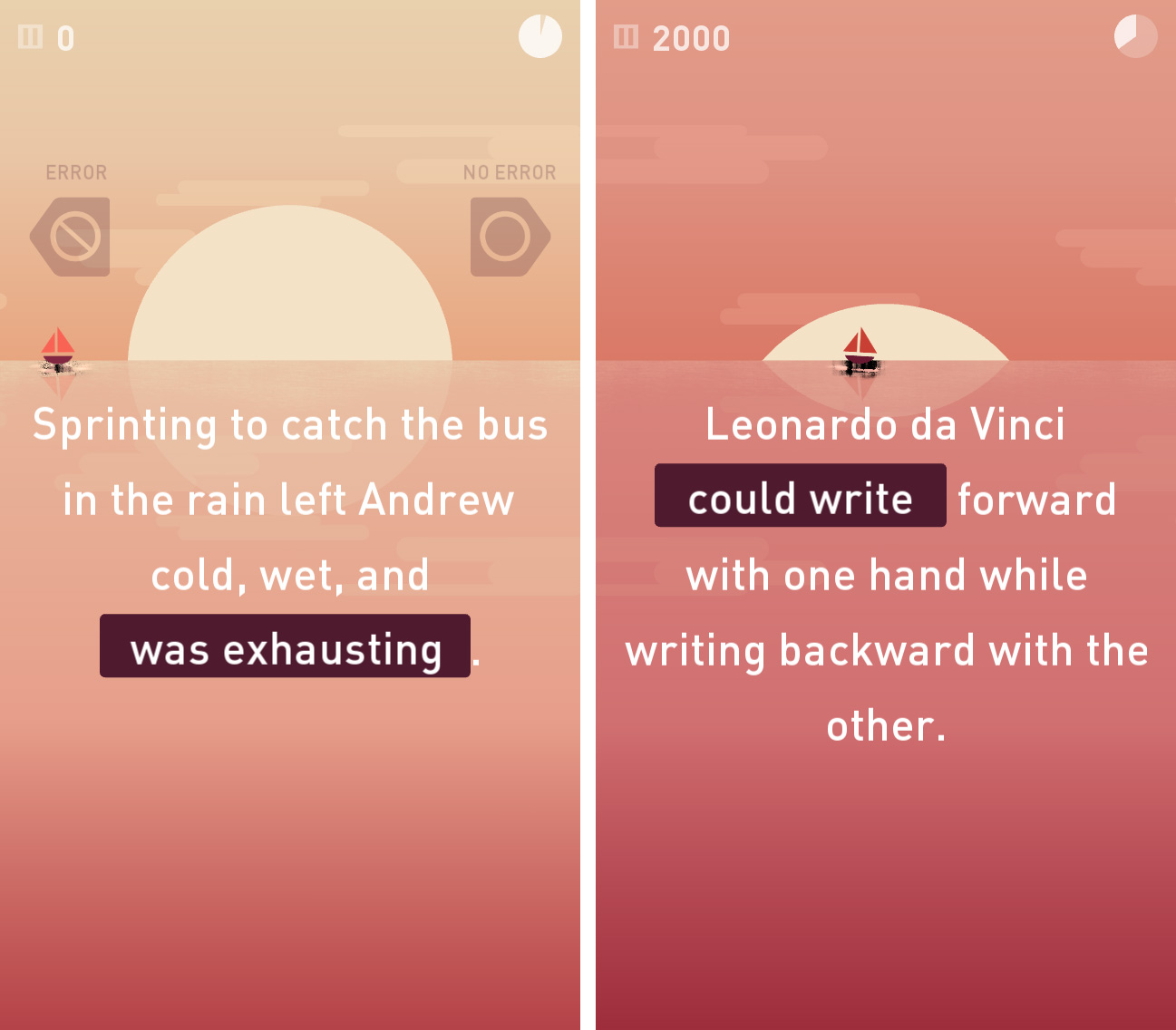 For me, the Syntax and Memory games are the most annoying. Syntax "Helps you identify grammatical errors to improve your writing skills"; Memory "Helps you retrieve words from memory faster, eliminating tip-of-the-tongue moments". Neither of these is very practical. If I were allowed to use the iOS keyboard in Memory, it'd be much easier. As it currently stands, though, you have to tap one of the ten letters you are given to finish they word they've started. It makes guessing easier, but once you get a letter wrong, you can't correct it. There should be a submit method here instead of every action having the potential to be wrong. Plus it's very easy to hit the wrong letter.

Syntax's problem is its lack of fact-based content. Basically, the game gives you a sentence and highlights one word. You can swipe to the right if there is no error and left if there is. Many of the correct answers are subjective, depending on what grammar curriculum you were enrolled in. Every person has his own writing style — this sentence would be wrong according to the app because it thinks "his or her" is more correct than "his" and "their" is randomly correct as well. Since I don't plan to pay for the service, it's annoying to constantly fail the game because I have a different opinion and not get to play the next one.

Most of the other games are okay. My favorite one is Processing, which is basically a Tetris-like speed reading challenge. Blocks with words on them drop from the top of the screen at a set speed. The first level is set to 240 WPM and the last around 340 WPM. When you finish, you'll be quizzed on what you read to make sure you actually comprehended it. The pattern is pretty easy to pick up since it's usually number-based. The game is great for people like me who are slow at true reading. It still has a small issue, though: The base reading speed may be too fast for some people. I struggled with it when I started because, despite being able to type around 120 WPM, I can usually only read slightly higher than that.

Rankings that make you feel stupid 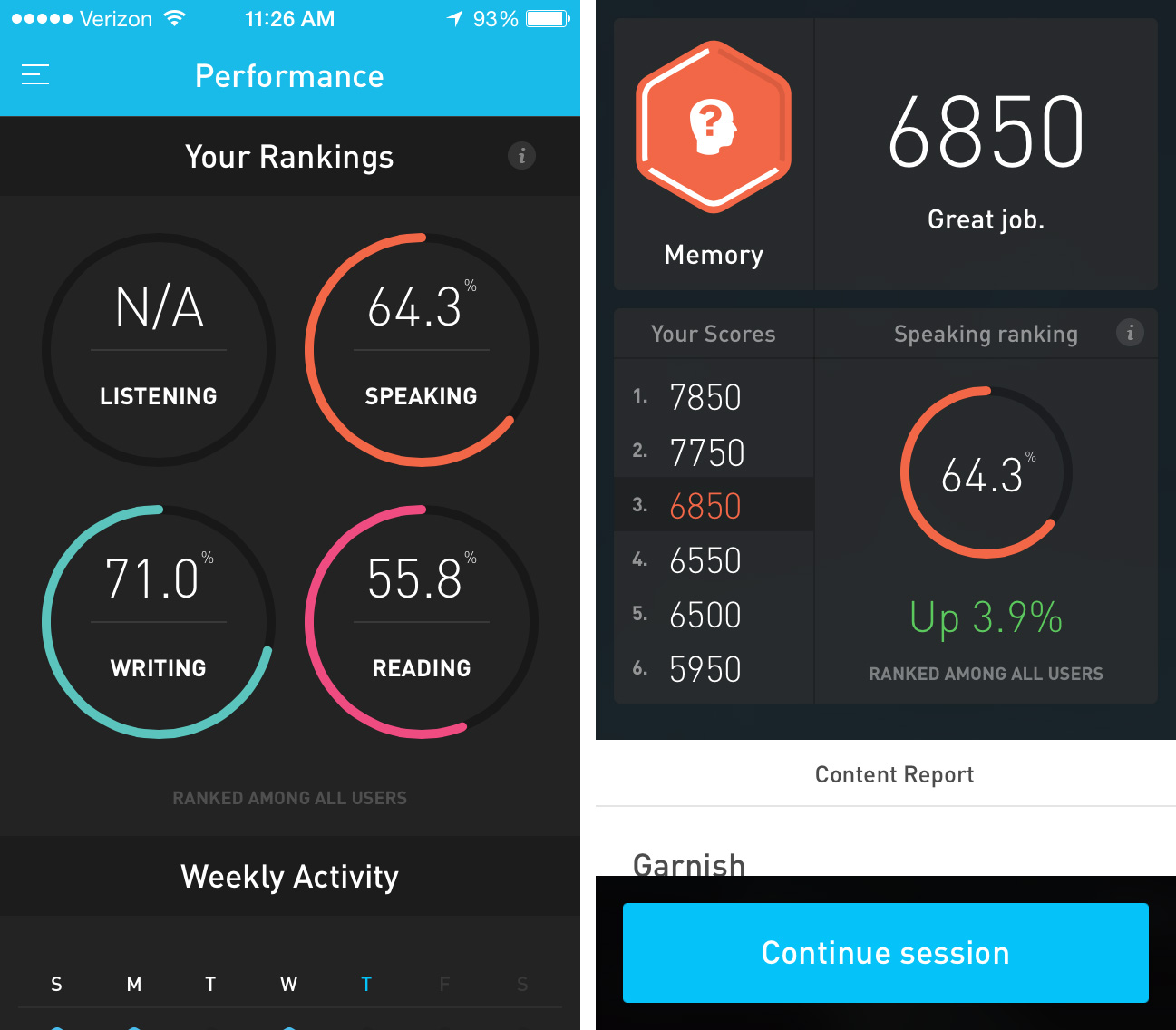 The last key feature in Elevate is performance rankings. When you're finished with a game, it tells you how you did alongside other users. There's a warning that your ranking will not be very high if you're a new user, which I think they should fix based on other people's scores in the first week. Other than that, the rankings are pretty straightforward, and usually depressing. Even when I feel like I did well on one of the games, I get crushed by the statistics.

Cool, but harsh at times

I really enjoy the idea of Elevate. I enjoyed using it this past week and will probably continue "exercising" my brain on a daily basis. On another note, I have found it hard to take the results with a grain of salt. It's difficult to not get frustrated when you keep failing a game because you don't have the latest edition of Merriam-Webster's dictionary scanned into your brain. And even though most of the app is intuitive, it hits arbitrary roadblocks and becomes overwhelmingly frustrating at times.

In light of its enigmatic UX elements, I would recommend downloading Elevate and giving it a try. It's not the most perfect app for keeping your mind sharp, but it does better than anything else I've used. Hopefully the future is full of feature enhancements.

Update: Some of my concerns have been addressed in version 1.7 of the app, which adds "adaptive difficulty", among other improvements. It's still annoying at times, but I have found it more tolerable lately than before.