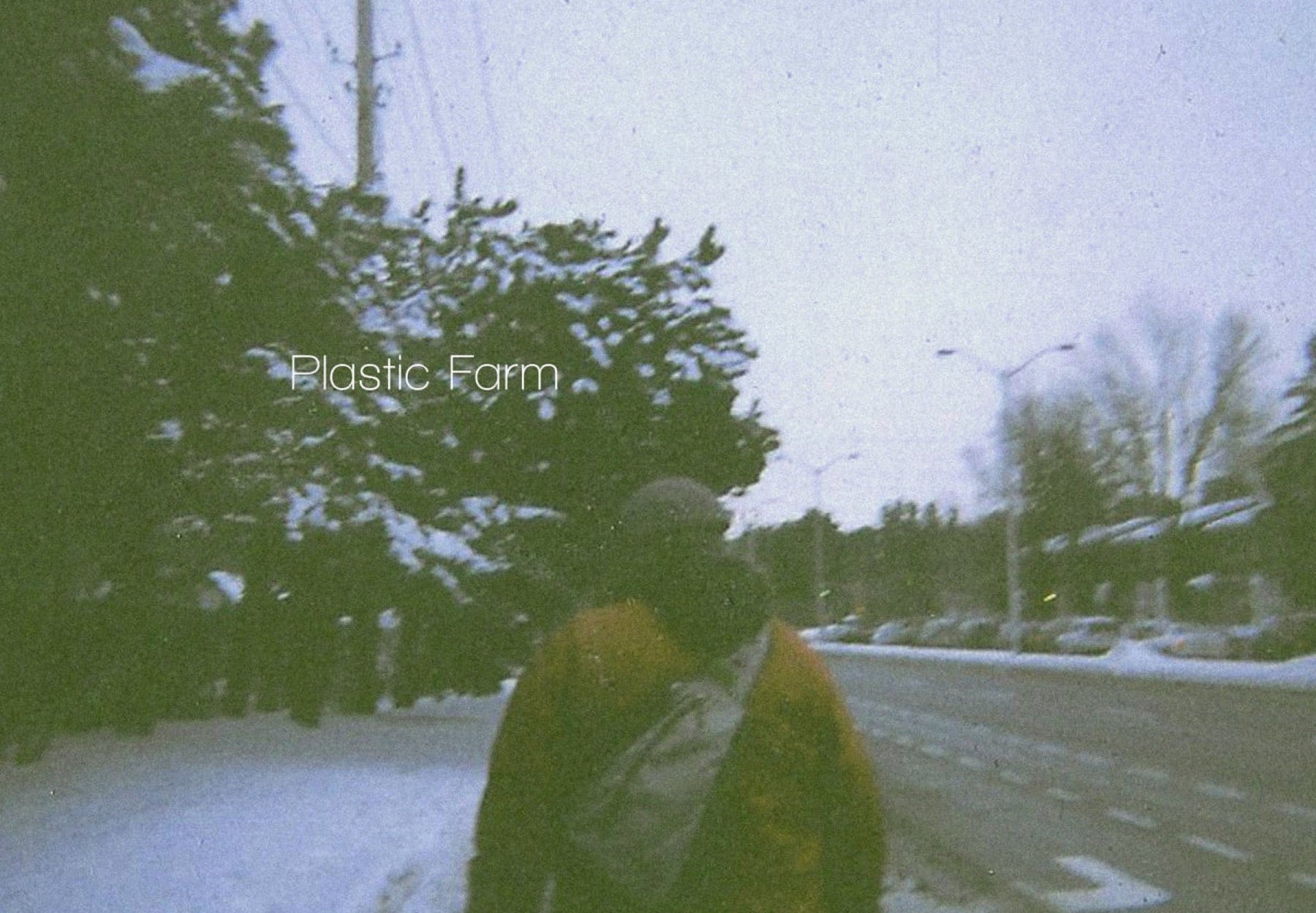 The past few months have been full of travel, and I've found lots of interesting soundtracks for each city I've been in. When I got to Brighton, Spotify's Discover Weekly for me included Plastic Farm. The album art was sweet, and I loved what I heard so I reached out to Michael, who basically is Plastic Farm, and we had a chat.

Why did you start making music?

I've done music my whole life. So there's not really a why, that's just the way it's been. I started just singing and playing drums as a kid. Just random melodies would come into my head and I'd sing those. I'd make up the key I was in, I guess. My grandma also had a piano so I played that. I grew up with drums and piano, then guitar kinda came later.

So what is Plastic Farm?

My brother and I thought of it. I was probably like 14 when we thought of it. We were talking about GMOs or something and the phrase plastic farm came up. I said "Hey that's good name for a band!" and it actually became a band name so (laughs).

Do the tools you create with also give you inspiration?

Oh for sure. I've been diving into that more now than before. Do you listen to Turnover at all? They're a huge inspiration. Every song in the Peripheral Vision album has this unending synth pad, and that's the Superego pedal. I was really inspired by that pedal. It's pretty much a freeze pedal — you just play a chord and it sustains it forever — but you can layer sounds on it. That pedal is on every song I've recorded for the past year or so.

What I do is record it through an amp, then leave it on for 12 minutes or however long I want. Then chop it in the middle and throw in another track so it'll be stereo. I put a lot of chorus and vibrato filters on it to create the sound I'm going for, which represents that feeling, the one all my music has.

That's one that really inspired me, an Melodyne is a big one as well. It's the most used pitch correction software. Ah you used it because you learned to sing with drums? Haha, actually the part that inspired me was creating artificial harmonies. Like what Bon Iver has done with his recent album, making your own harmonies instead of recording them. Being able to layer the same sound over the note I've already played, then create a choral effect is what I love about it.

I noticed your vocals are really uniquely produced. They sort of envelope the space.

Oh yeah, so on the EP I actually recorded them all stereo. I don't know why, it was just natural to me. They're all double-take vocals. I didn't use any artificial harmonies on that EP, but what I did sing the lyrics at the fifth of the scale. I just stayed on that note while singing the lyrics, and did a double-take of that too. It was really low in the mix and this slight overtone. That's something Turnover did with their album as well and I thought it sounded awesome so I wanted to try it.

How did you learn to play drums?

My dad got me on drums as a kid and I took lessons on and off. I actually got lessons from the drummer of Johnny Clegg. I don't know if you know the band, but his name is Derek Debeer and he's super big in South Africa. We're so lucky he just happens to live in Ottawa. I took lessons from him for a while and he taught me a lot of good stuff.

With piano, I took lessons for a little while and started reading music a bit, but I really taught myself the piano and the guitar overall.

What's your recording setup like? I remember reading something about a basement.

I have the Scarlett 18i20 interface and I usually record at my mom's basement, but right now I'm living at my dad's so I'm in my bedroom doing everything right now. Worse sound in here than the basement, but I make do. I use two large condensers — like shitty $100 Behringers — and SM57s and that's about it. The condensers are for drums, vocals, and really any stereo recording. For the kick drum I've got a PG... Something. One of those weird L-shaped ones.

I basically use the same kind of mic — two of them in combination — for any stereo recording I do. =If you have the funds, then why not get a $1500 mic. But if you don't have the funds, a $100 one is just as good. That's my logic.

For guitars, I have a Fender Jaguar, Modern Player. I love that guitar. And a Fender Kingman acoustic. Then a crappy bass... El Degass I think? It's like, I need a bass, and I've got that bass, so I'll use it. Not too picky there. (laughs)

Tell me about the basement. I've dreamed of recording in one.

It really is a dream. Being underground is special. I got lucky because the neighbors are huge musician stoner dudes too so it works out well. They have band practice every week so they don't mind the noise in my place. And now we're doing renovations in the basement and they're catered toward the studio setting. We have glass between two rooms and a XLR rack that connects the two rooms. One's for a live room and one's for mixing.

I find the biggest challenge in home recording isn't the room, it's the space. You just don't have the right amount of space for all the shit you have. Taking up two rooms should solve that problem.

When you’re writing a song, do lyrics or music come first?

Always always music. I'll get an idea going on guitar or piano and a melody will pop up. Then I'll sing random words and make words out of that, then those are the lyrics. So do those words mean something or are you just writing words? That's the thing, you find out what it means after.

What does “Stay home tonight, you force yourself to abide” in For a Moment mean?

It was just saying "fuck all social interaction". I worked on this song for a long long time and I was still adding stuff to it when I remember getting invited to this party. I didn't want to go so I went home and worked on that song.

Are your songs stories or dreams that you've had or?

Dreams would be a good way to put it. I'm inspired by places so I like to a place with a nice vibe, like these train tracks behind my mom's house. These really nice suburban areas are where I really like going. Not so much now, but with the EP it was a huge inspiration that actually fed feelings for me to make those songs. I tried to capture the place in those songs.

If someone connects with your music, are there other artists you'd recommend?

Michael and I had an hour-long chat on Skype. There are some other details that didn't make it into the final edit — Skype having issues as it does, bouncing hammers, Bon Iver's latest album, and of course laughs — so give the audio version a listen if you'd like.

Start listening to Plastic Farm on Bandcamp and check out Michael's other project Nighttime in Kansas if you like what you hear.