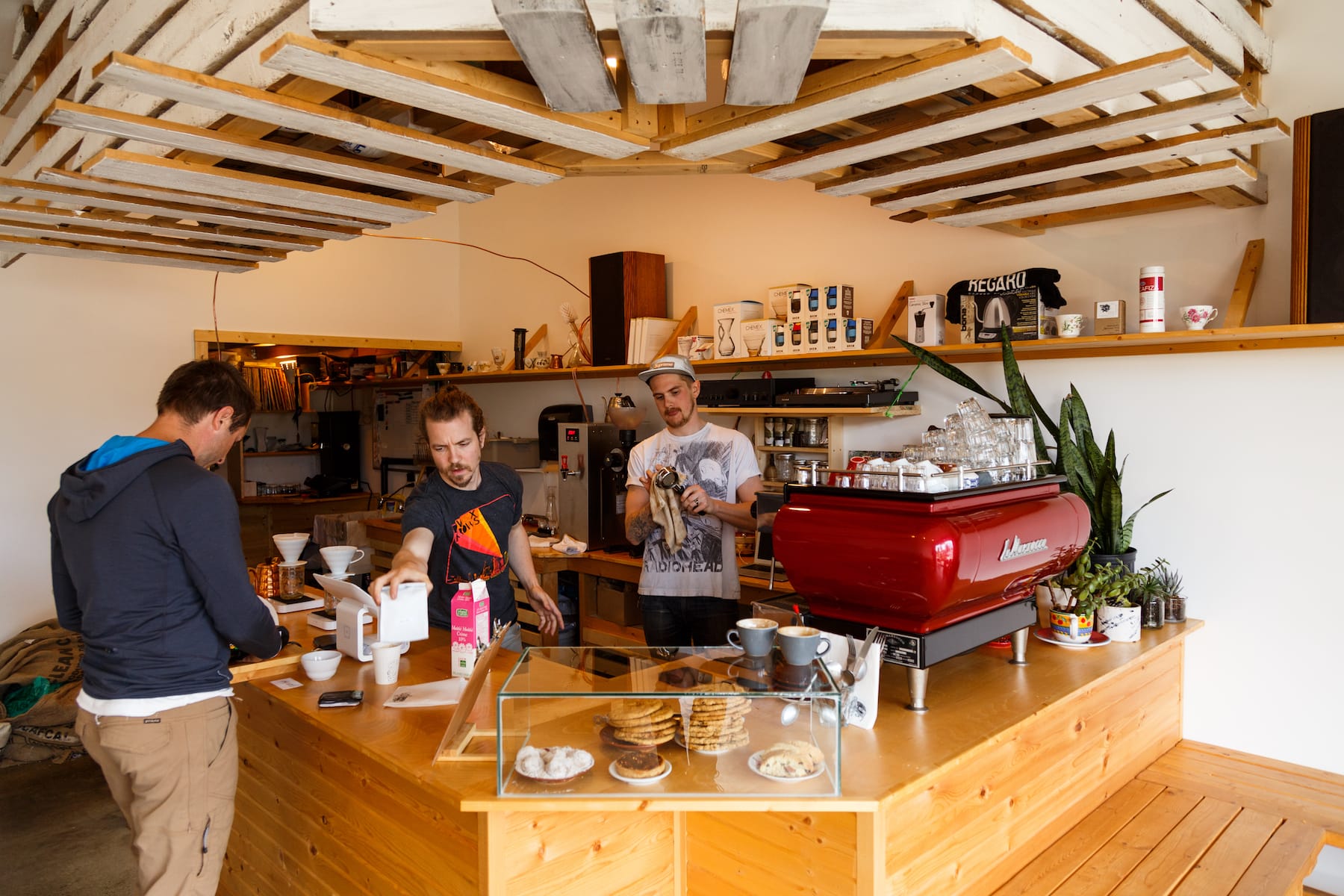 I've been avoiding writing this because I only took one photo today and the post is so dull without photos. The day was pretty interesting, though. The only other place on my list to work from was Riso, a restaurant in Lantzville. The problem is, I did not want to ride 15k on a mountain bike. There are a lot of hills here, and I'm tired of them at this point. It was also raining all day, so I took what seemed the easier route and went to Regard again. It was still a 15-minute ride in moderate rain, and when I got there everything was wet. Somehow my backpack stayed dry though.

Across from me at the only table in Regard sat a longhaired man with a lot of small notebooks. Small being pocket-sized. He had four or five, which was strange for an average person, so I took him to be a writer of sorts. After he got a drink and finished chatting with someone, I asked what all the notebooks were for and he said they held his poems. He was moving them to a new, larger notebook.

For the next few minutes, we discussed the silly troubles of being a writer. He mentioned that he was a dishwasher at a restaurant in town, and I brought up how funny it was that artists create better art when they aren't using their creative side at a job. I thought of Adam Young, who used to work in a Coca-Cola warehouse and record in his basement. But there is also a balance, I said. You can't work in complete isolation because there's no inspiration in that. Of course, if you're working with people all day as a waiter or host in a restaurant and you're like me and most artists, you'll may be too tired at the end of the day to pursue your passion.

Once we jumped to the topic of authors and TV series that were enjoyable, I mentioned The Martian and he talked about how much he loved George R. R. Martin's obscure sci-fi work. We talked Steven King for a minute and I mentioned 11/22/63, which is one of my favorite shows in the past few years. He said a lot of good things about the BBC radio drama version of The Hitchhiker's Guide to the Galaxy, which I had not even heard of before.

My favorite part of the discussion was technology and celebrities. I introduced myself around this time. The poet's name is Lee. We got to talking about how San Francisco was when he was last there in the mid-90s, and how much it's changed, which of course brought the discussion to technology. Lee doesn't even have a phone; he has an email address because he needs one for pay stubs at work. He thinks that phones just add a sense of urgency and anxiety to everything, which I always love to talk about. I found it really interesting, however, because people use their phones a lot less here in Canada than they do in California, which has been refreshing.

He mentioned TV as well, which is something that's slowly being replaced by more personal devices. The way technology is marketed is fascinating. One of the main things it's being used for at a large scale is "connectivity". Everyone wants to be more connected. I've personally never cared for such things, but either that's what companies want us to think or that's what the majority of us want. Whatever the case, it's one of the main draws of any new technological achievement lately. Most of the updates announced for iOS this week were based on messaging and communication. Because we obviously need more of that.

I could easily turn this whole thing into another long post about the broken world, but that doesn't matter. Little discussions like the one I had with Lee are really nice to have once in a while. When you spend all day with tech like I do, there are plenty of opinions built up about why it's terrible and why it's good. I wish I felt confident enough with any of my opinions to push them, but people will do what they want to do. And is it really destroying humanity? I don't know.